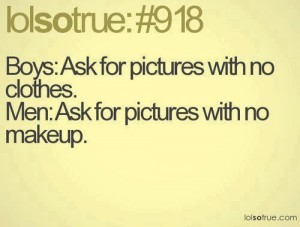 1. He involves you in things on his own. He makes you a part of what’s going on and always includes you. This is one of the best feelings there is; being included automatically by someone you like or love. If you have to ask or put effort into be included, you were probably never really welcome in the first place, as sad as that sounds. And if this is the case, I think it’s safe to say that your efforts would be better spent on another person.

2. When he goes out with you, he doesn’t feel the need to change who he is to impress you/others. Ugh, the chameleon. There’s just something annoying about a guy who’s constantly changing who he is to appease other people. IMO, guys who do this have weak characters and should be dumped ASAP.

3. He notices the stuff you go out of your way to do for him and appreciates it. Added bonus: He might even show or tell you how much he values it too.

4. He knows how to handle adversity. Life is full of curveballs, problems, a million little issues. You know you’re dating a grown ass man when He doesn’t fall apart or get irrationally overwhelmed by small stuff that comes up. Have you ever read the book “Don’t Sweat the Small Stuff”? Well, this guy has! He takes it all in stride, and most of the time remains rational, even-keeled and just deals with it. There’s nothing worse than someone who flips out at every little unanticipated problem.

5. He considers his partner a partner, not as a separate attachment to his life. I don’t know about you, but when I am with someone, they are very much a big part of my life; definitely one of the biggest parts! If a guy seems to value your partnership only as just an accouterment or accessory to what he’s already got going on, it may mean that he’s not quite ready for a full on relationship. In my opinion.

6. You always know where you stand with him. One of the worst feelings in the world is not knowing where you stand with someone. A guy who’s up front about what he wants, what he’s looking for and what he wants out of you is a guy worth respecting. He doesn’t jerk you around and he doesn’t string you along. He got that out of his system in his late teens/early twenties.

7. He’s reliable. If he says he’s gonna be somewhere at a certain time he’ll be there. He’s usually not late unless for good reason, and if you ask him to take care of something he’ll get it done. This is one of the sexiest traits a guy can have!

8. He’s motivated. He’s ambitious, and he’s active about accelerating his career on his own. If you’re with a guy who seems to be lacking motivation and you find yourself wanting to push him along, this is usually a red flag. If he can’t find it within himself to do this on his own, your efforts certainly won’t be enough. Move it along.

9.There’s no drama. Communicating with him is easy, peaceful…ENJOYABLE! There’s no ups and downs, constant highs and lows. Turbulence is minimal, and you enjoy each other’s presence without either of you being ashamed about it. If a guy acts one way around you and another way when he’s in front of other people or his friends…it’s safe to say that the forecast is looking rocky.

10. He has clothes for every occasion. If the guy you’re seeing only owns jeans, T-shirts and tennis shoes or on the contrary: suits and dress-wear…something is definitely off.

11. He doesn’t do drugs on a regular basis. Sure, we’ve all experimented. And he may even do drugs very seldomly. But, anything more than seldom recreational use can be a huge red flag.

13. He satisfies you in bed, and it’s a priority of his. If you’re able to have orgasms, you should be pleased in bed every time you have sex. If you’re not being pleased, what’s the point? A guy who’s only concerned about his own sexual pleasure is definitely nowhere near a “grown ass man”. And there is pussy just waiting for you online on the adult dating sites so have a look there for some very naughty fun.

14. He doesn’t feel the need to brag. Nobody who has real value has to brag. Ever. If I hear a guy bragging about something, it’s an immediate turn off. Now, it’s OK to voice your achievements and successes, but there’s a certain tone of voice, language and attitude that it takes to brag and if he has it, no bueno. Attention whore manchild behavior.

15. He keeps in touch with his family. On his own! If he calls his mother/father/sister on a regular basis just to catch up, chat and check in on how they’re doing you can be assured that he’s the kind of guy who has morals, as cheesy as that sounds. Those morals will carry on towards other aspects of his life, your relationship, and how he deals with things in general.

16. If he says he’s gonna do something, he does it. Following through on your actions is a big deal these days. There’s so many flakey people, that it’s actually become a huge attractor when a man does what he says he’s going to do. Props to all the reliable dudes out there!

17. He never overpromises and underdelivers. In fact, I once knew a guy who’s motto was “underpromise and overdeliver”, and he followed through with it! That right there was an immediate panty-dropper 😉

18. He has genuine interests and passions. Things that he likes to do, that he’s actually passionate about! This excludes drinking, partying and hitting on chicks. And, if he has passionate opinions about things as well, this is even better.

19. His apartment is actually nice and not totally barren or messy. It’s woman-friendly and doesn’t feel like camping outdoors. A part of growing up and finding your manhood is having a messy place and/or a bachelor pad that isn’t necessarily girl-friendly for a while. However, after a certain age this just doesn’t fly. If you haven’t figured it out by your late twenties, this typically shows that you are just plain messy and don’t take pride in having a clean home. Do you wanna be the girl who’s constantly cleaning up after him? Didn’t think so.

​20. He handles jealousy like a grown ass man. He doesn’t get upset or angry. He realizes that the hot piece of ass he’s with is going to get attraction from other men and understands that it’s just a fact of life. And even better: he uses this as a catalyst for sex.

21. He wants/offers take care of you if you’re not feeling well. Just as you do for him, on a daily basis, he should do for you when you’re especially feeling low.

22. He encourages you to try new things and explore your own passions. He genuinely cares about you and isn’t threatened by the idea of new, exciting or interesting things that arise in your life. And better yet, he wants to help you find these things!

23. If he’s upset about something, he doesn’t beat around the bush. He’s upfront about it and doesn’t have any problems voicing his feelings to you. Using actual words. He’s not passive aggressive.

24. He doesn’t boss you around. If he wants you to do something, he’ll ask nicely without expectations or hinting. He understands that this makes you want to help, as opposed to being resentful about it and doing it for him begrudgingly.

25. He’s active. He does lots of things, he’s busy all the time, and he exercises. And best of all, he is still able to make ample time for you! The best compliment 🙂

Now, you’re probably not going to find a guy with every single one of the attributes above, obviously. So before you all go on a tirade about how the perfect man with all these attributes doesn’t exist, just consider a few of them. 🙂 Find established men at MillionaireDating.Guide.

If your man/crush has even just a few of these traits he’s probably got some other great qualities you haven’t even discovered yet. And guys, it’s never to late to banish bad habits. Self improvement is something you can practice at any age.

Thats all for now.
xo Viva