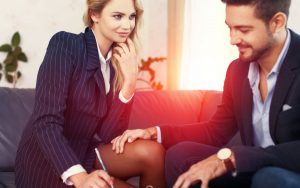 Listening is a simple skill to master. It consists of two parts: focusing your attention on another person, and communicating to them that you’re present.

This means you’re actively processing what they are saying, and at the same time, sending non-verbal signals like good eye contact.

This isn’t too complicated. As social beings, it’s something humans are hard-wired to do. Even the best responses like paraphrasing, asking thoughtful questions, and giving feedback are skills we naturally pick up in the course of our lives. Everyone knows they need to make eye contact while they’re listening.

Everyone knows that it’s important to show genuine interest.

But when it comes down to it, most people are terrible listeners. If you ask 10 people when was the last time they had a deeply meaningful conversation, 9 of them won’t be able to remember when it was. Instead of fully listening, people fall into common mental traps.

The good news is that by being aware of these traps, you can stop doing them, and eliminate the blocks to being a better listener than 99% of people.

Here are seven things you are probably doing that are preventing you from being a good listener.

1. Rehearsing
You’re too busy thinking of what to say next to focus your attention on the other person. You have an awesome story to tell, or a point to make. Guess what, no one cares. When you’re running through a script of how the conversation should go in your mind, it’s impossible to fully focus on what the other person is communicating to you. No matter what you may think, this WILL show up non-verbally. Whether they know it consciously or not, others recognize when you’re rehearsing.

Instead of planning how a conversation should go, be open to wherever it may end up. The only thing that will have you prepared for every conversation is hours and hours of experience.

2. Comparing
When you’re listening to someone else talk about their life or experience, it’s natural to compare to it yourself, other stories you’ve heard, other people, etc. instead of actually focusing on what they’re saying.

But other people don’t want to know how what they’re saying stacks up to everything else you’ve heard, they want to feel like you understand them. Show that you’re listening by relating to THEIR experience, rather than comparing it to something else.

People don’t communicate because they want you to solve their problems; they communicate to express who they are as a person. Instead of problem solving, use someone’s communication as insight into their personality. Let’s say you’re talking to a girl who’s telling a story about how her new landlord won’t allow pets, and she don’t know what she’s going to about her dog.

Instead of jumping in and giving advice about how to keep the dog, focus on what personality traits she’s conveying through her story. The important takeaways are that she is loyal, persistent, caring, and loves animals. Connect with her on these points instead of giving her advice about her situation.

Any good story has conflict in it. It’s not your job to resolve the conflict.

4. Mind reading
This is when you try to figure out “what’s really behind” what someone’s saying, or guessing their thoughts. A perfect example: “Is she saying she’s going to the bathroom because she really needs to go, or does she hate my guts?”

Sure, it’s important to have social awareness. But this is a subconscious skill that comes from tons of interactions, NOT from consciously assessing someone’s behavior in the moment. This doesn’t work, and they can tell you’re not listening. Part of being socially competent involves giving people the benefit of doubt and taking what they say at face value during the conversation.

If you’re going to analyze an interaction for deeper meanings and motives, do it after the conversation is over, not during it.

5. Identifying
This is when you take everything the other person says and relate it back to yourself. So if someone tells you about a time they had to go to the doctor and had surgery, you immediately jump in and tell your own story about getting surgery. It’s fine to share your own stories, but only do it after showing that you understand and value your audience.

Identifying includes “me too” (“You love Mexican food? I do too!”) and one upping. No one likes a one-upper, and no one likes people who only talk about themselves.

6. Filtering
This is when you are half-listening, waiting to discuss things you care about. If you feel like you often get into conversations with people that are “hard to relate to”, you are probably filtering.

Despite what you may believe, we don’t relate to people because of the facts we share. We relate to the emotions behind what we discuss, not the content itself. If you’re into mountain biking and a girl is telling you why she loves scrapbooking, it’s easy to filter out that part of the conversation and lose interest.

But instead, you can relate to her on the level of something that you both feel passionate about. You both share the same emotions about your passions, and communicating this shows you’re truly listening.

If someone is discussing something that is “boring” to you, find out WHY they care about it. This makes any conversation interesting, and is the antidote for filtering. Finding out how others relate to their world is a sure-fire way to be a good listener.

7. Agreeing too much
Finally, this is a major reason why people are not only bad listeners, but boring conversationalists as well. This is when you just want everyone to like you, so you go along with everything they say.

When you agree too much, you do things like head nodding, saying “uh huh” all the time, and offer nothing of value to the conversation.

It’s important to sometimes disagree to stand up for yourself and to show your true personality. You’re not going to get along with everyone no matter how hard you try, and you’re not going to leave an impression on anyone just by being pleasant and agreeable.

So now that you know these 7 things you’re doing that are making you a bad listener, it’s time to stop doing them, and you’ll see the quality of your interactions drastically improve.

130 episodes
Ready to take your lifestyle to a whole new level? Discover all the benefits of upgrading to a Leverage Membership.

Does Any Of This Sound Familiar... I’m a pretty successful and accomplished dude, but when I get around really beautiful women, its like my mind goes blank and my IQ drops 50 points. I can’t … END_OF_DOCUMENT_TOKEN_TO_BE_REPLACED