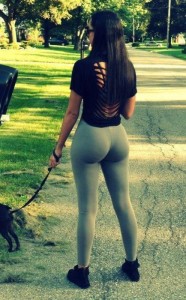 Who thinks it’s a coincidence that the guys who improve the fastest with women are approaching the most?

If you say, “Yeah, coincidence”… Immediate punch in face!!

I’ve now been coaching guys in this field for a decade. Every dude out there complains about approach anxiety: “I don’t know what to say,” “I’ll do it later.” Excuse, excuse, excuse.

I was introduced to PUA shortcuts via The Game in February of 2006. I finished the book in a day and went out that night to a bar in Mission Beach called the Beachcomber. It never even crossed my mind whether or not I was gonna approach. I knew I was going to do it because I had just invested 12 hours reading a giant manual on how to pick up chicks.

What kind of loser invests time in something only to stand around and not do it?

I didn’t know what the heck I was doing; all I knew is that one of the lines in The Game made me laugh, so I tried it. I walked up to a smoke piece and said, “Hey, you kinda look like Minnie Mouse.” We were hooking up 30 minutes later.

At the time I thought, “This is so easy.” I didn’t realize it was 95% luck- she had just broken up with her boyfriend, her friend encouraged her to hook up, and I walked into a layup. Reality set in over the next 2 months, when I did on average of 5 approaches per night, going out every night and didn’t hook up with a single girl.

I was going about this all wrong and subscribing to ridiculous PUA advice that made me look like a total idiot, but I was still smashing reps and learning through trial and error.

It took me YEARS to figure out the “Hook and Swoop” by having hundreds of girls blow past me when I tried to stop them. It took me years to stop using stupid, boring openers like “Hi, I saw you and I had to come tell you I think you’re really cute.” I’ve probably been told “Aww, that’s sweet but I have a boyfriend” 3,000 times.

When I first met Justin, we talked for hours every day over the phone about approaching girls. He always had the most hilarious lines, and every day during my lunch break, I would leave my miserable office job and hit on girls at the UTC La Jolla mall.

While practicing day game, I saw a girl walk into Rubio’s one day, didn’t feel like embarrassing myself inside, so I wrote this note on the back of my business card and left it on her windshield. “Not to be that guy to hit on you by leaving you a business card, but yeah, I’m that guy.” She e-mailed me an hour later, and I ended up dating her. I used “Not to be that guy” a minimum of 1,000 times, I used “Mr. Johnny Greaseball” 500 times, I used “The Director” opener 300 times, and I used “Risk Embarrassing Myself” 200 times in a couple months in New York alone.

Here is what goes through my mind when I see a girl I want to talk to:

It’s MIND-BOGGLING to me how guys do these things:

Approaching women is probably my single most leverage-able skill in life. I can go anywhere in the world, walk around for free and create fun and opportunities for myself. I can use the women I meet to meet other cool guys, or I can introduce girls to guys I want to connect with. Every guy is envious of this, and even though they’ll clown you or pretend to be above it, they know they can’t do it and it threatens the heck out of them.

If you want to be a beast with women and you’re not approaching every day, light yourself on fire. 🙂

Inner Confidence is a men’s lifestyle self-help service provider, founded by Robbie Kramer, with a suite of products and content, including coaching, mentorship, and information products on dating, … END_OF_DOCUMENT_TOKEN_TO_BE_REPLACED