If you’ve ever approached a random woman while going about your day, or studied up on strategies on how to go about this the most effectively, then you’ve most likely asked yourself the question:

“Should I be direct and tell her that I like her, or should I play it cool?”

There is an ongoing debate about the benefit of directly stating your intent vs. indirectly striking up a conversation and letting that intent be demonstrated naturally.

In this article, I’ll take a stab and explaining the rational and reasoning behind both approaches.

I think at the most fundamental level, every approach is really a direct approach. An indirect approach only differs because for the first 5-90 seconds she might not fully realize it, but unless you want to end up in the friends zone, you’ll have to eventually let the cat out of the bag.

For guys starting out with approach anxiety, it can be easier to start with an indirect style to make approaching less daunting.

I’d recommend simply talking to as many strangers in the shortest amount of time possible. I used to walk around an outdoor mall, attempt to make eye contact with people passing by and say “Good morning” or “How’s it going?” (with a head nod and continued walking).

After that became easy and boring, I built up the courage to actually attempt to stop and engage women I was attracted to.

I’d ask them to stop, tell them they were cute, and literally run away.

I was that scared.

But after about 20 of these, I realized there was nothing to fear and I kicked myself for running away on a handful of approaches when her eyes lit up after my compliment and I just ran away from a potential relationship.

Then I experimented by asking for the time or directions, and during their response I’d interrupt and say “Just kidding, I just wanted to flirt with you.” This was kinda fun and often resulted in a laugh after which I’d try to segue into a conversation.

Then I got even more ballsy and blunt.

This was even more effective because I had fun with it.

“Hey, I had to risk embarrassing the hell out of myself to come and meet you. I’m Robbie, don’t worry, I’m only like 1/3rd creepy.”

Had some great success with this as well.

After about a year of consistent daytime approaching, I stopped caring about rejection and realized it usually due to factors outside of your control, like her relationship status, mood, and task at hand/busyness.

However, if you’re getting rejected over 90% of the time it means your approach skills probably suck and you need to go back to the drawing board.

Eventually I got to the point where I started gravitating back towards indirect because I learned to naturally express my direct intent through nonverbal communication and innuendo which is 100x more smooth, socially acceptable and powerful. This includes eye contact, body language and positioning.

I always consider the environment to ensure the best strategy.

In a social environment, I’m 99.9% going indirect and situational. Walking up to a girl in a bar and using an opening line is pretty lame. The best and only opening line I would use is: “Hi, I’m Robbie.”

Otherwise, I’d strike up a conversation using something situational or just flat out silly.

“Oh my god, I can’t believe it, I was seriously about to wear that exact same outfit tonight but I changed at the last minute, we would have been twins!” (The more ridiculous and girly the outfit is the better.) Disclaimer: If you’re a feminine dude, this might not be a good option for you, lol. She might actually believe you.)

But if I run after a girl down on the street, I’m going direct because anything else would be stupid and weird.

In an environment where a ton of other people can hear me like on the subway or in a library, I’d write out a flirty note on my phone and hand it to her. I’ve done direct talking approaches like this and they work, but the risk of embarrassment is super high, not just for you but for her too, that sometimes you’ll get rejected because she couldn’t handle the tension and social pressure. 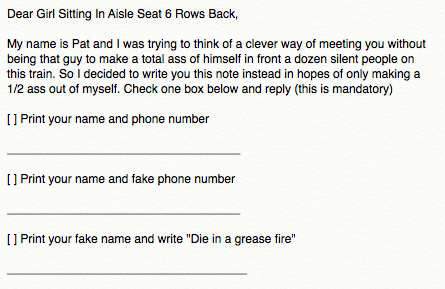 I don’t really like talking to random people. I’m not the go around and talk to everyone type of dude.

I loath small talk so I also tend to gravitate away from indirect because I’m so comfortable cutting through the bullshit with direct so why would I bother?

But that would be a cop out if I sucked at conversation skills.

If your conversation skills suck, you’re better off practicing indirect because it will often result in longer conversations and more practice. This will teach you how to vibe, cut  threads, and think more quickly on your toes… aka become a better flirt.

If you’re out approaching and getting destroyed and rejected, switch to a few indirect approaches to quickly change your mental state.

My all time favorite approach is the no-bullshit, I have no time and I’m not even gonna let you talk sort of style.

“Hey I saw you (doing _____) and I wanted to meet you… but I’m late and have no time to talk now but would love to chat later. Give me your number/Instagram and if you don’t like me, give me a fake one.” (Hand her phone) If she’s giving me tons of love I might change my mind and take her on an instant date. “Oh wait I think I have 20 mins, let’s grab a coffee real quick.”

The key is to develop your own style and what feels the most comfortable to you. Everyone will be slightly different at their best.

Inner Confidence is a men’s lifestyle self-help service provider, founded by Robbie Kramer, with a suite of products and content, including coaching, mentorship, and information products on dating, … END_OF_DOCUMENT_TOKEN_TO_BE_REPLACED