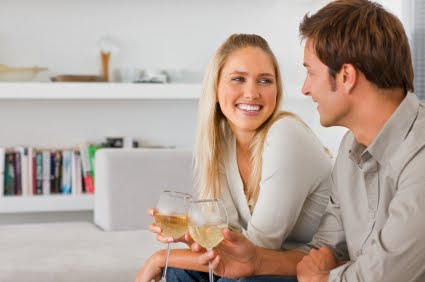 A common challenge for guys during the process of developing their conversation skills is that they struggle to connect with girls intellectually. But most of the time, this isn’t a challenge they realize they’re facing, because it expresses itself in other ways. The most common way it shows up is when guys ask “How do I turn my brain off and talk to girls on their level?” or “How do I connect with girls at parties?”

This is something I’ve always had a natural inclination for. I didn’t even realize it was a useful skill until I heard a bunch of other guys lamenting about the challenges of talking to “dumb girls.” While their view of this is skewed, with some reflection, I’ve been able to identify that in my case this ability arose out of a combination of my natural personality traits with some skills I’ve consciously developed. It comes down to three things I’m doing.

The three factors that you need to employ to connect with anyone are curiosity, unconditional positive regard, and empathy.

The good thing about curiosity is that “fake it till you make it” definitely applies here. Faking curiosity looks the same as actually being curious, and it’s how you learn curiosity as a social skill. When you ask questions to fully understand where someone else is coming from and make statements to relate it back to your own perspective, there’s no such thing as “faking it”. Your actions matter, not your thoughts, so there’s nothing you’re really faking here.

Asking questions to find out what other people value in life will always prompt good discussion, and it doesn’t matter if someone is a party girl or a genius who likes all the same things as you- both of these individuals have values that you can explore, and all these values point to ironies about the human condition and commonalities we all share.

Unconditional positive regard is a fancy way of saying not to judge people. It’s one of the first skills that new therapists learn, which is how I came across it. Psychologist Carl Rogers coined the term, and Wikipedia has a great definition: “the basic acceptance and support of a person regardless of what the person says or does.”

When a woman feels that she can tell you about anything and you won’t judge her for it, that’s extremely powerful. That’s a foundation that can lead to the raunchiest sexual conversation, or it can lead to her telling you her deepest secrets faster than she’s ever told anyone else before.

Carl Rogers sums up why this is so powerful: “When a person realizes he has been deeply heard, his eyes moisten. I think in some real sense he is weeping for joy. It is as though he were saying, ‘Thank God, somebody heard me. Someone knows what it’s like to be me.’”

I saved empathy for last on purpose. Everything thinks they know what it means, like compassion, or sympathy. But let’s look at what it ACTUALLY means and how we can use it to our advantage in this situation. Yes, that means I’m getting out the dictionary.

The Random House Dictionary defines empathy as “the psychological identification with or vicarious experiencing of the feelings, thoughts, or attitudes of another.” When I said everyone thinks they know what it means, it’s because people think they get it at a superficial level. What the typical superficial understanding misses is how this can be a superpower in your arsenal of connection skills.

Empathy means psychological perspective-taking. It’s more than just seeing an experience through someone else’s eyes; it’s living it through their all their emotions and senses. I guarantee that if you try to fully empathize with someone about an experience they’ve had, you will not run out of things to say. There are always more things you can ask to better understand where they’ve been and where they’re coming from.

Never run out of things to say? How is this possible?

All humans have experienced the same emotions, and we connect by resonating with each other emotionally.

When you fully try to understand someone else’s emotional experience, that’s how emotional bonds are formed.

The homie Carl Rogers is back at it again: “Being empathic means: ‘To be with another in this way means that for the time being you lay aside the views and values you hold for yourself in order to enter another’s world without prejudice. In some sense it means that you lay aside your self and this can only be done by a person who is secure enough in himself that he knows he will not get lost in what may turn out to be the strange or bizarre world of the other, and can comfortably return to his own world when he wishes. Perhaps this description makes clear that being empathic is a complex, demanding, strong yet subtle and gentle way of being.’”