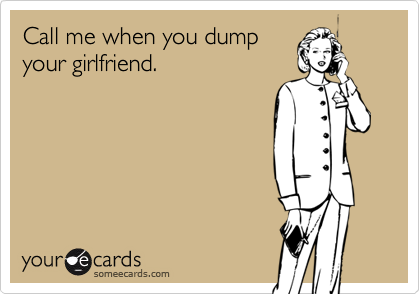 It’s easy to fall into the trap of letting a girl who isn’t really a good fit for you stick around because she prevents you from feeling lonely.

We all feel lonely at times. It’s part of the human condition. And for guys who aren’t naturally good with women, it’s normal to feel lonely most or even all of the time.

Once you start sleeping with the kinds of women that you like, there’s a critical point where you have to stay on your path. It’s easy to get sucked into a relationship by default, that happens from settling with someone who makes you feel less alone. That feeling of loneliness? The novelty of a new sexual relationship is one powerful way to drown it out.

Too many guys end up dating girls long-term just by default. They never made the conscious decision to do it, but they end up with her because it fills a space in their lives, and the access to sex is a powerful motivator.

What they don’t realize is that space will always be there, and is part of being human. The only thing that you should attempt to use to fill that space is your drive to be better. Part of being a man and accepting your place as an adult is a constant drive for self-improvement. And that emptiness you feel will only get better through your journey of self-improvement, not by a woman.

Friday night dates. Complacency. Stuck banging one girl forever. Not having threesomes. Never traveling. Having the same lame friends. No self-growth. These thoughts seem like a great foundation for a happy relationship, so how could this touching story come to a bad ending?

Now of course if you’re not having these thoughts and are actually completely satisfied in your relationship with zero doubts, regrets, or insecurities, then I’m not talking about you. You’re already winning. However, if you are experiencing these feelings and emotions, stay with me. I’m not going to focus on the negative actions some girls do, because that’s playing the victim game- a game for losers. I’m just going to focus on things from a personal level. Your life is on you. No one else.

Nothing is worse in a relationship than that moment you realize you’re unsatisfied. Even if you get an attractive girlfriend, have a great time for a while, enjoy love, have weird sex, and experience shit together, eventually your insecurities creep back. That little voice in your head comes back and says “Hey motherfucker, I’m still here.” It’s not really noticeable when you’re in the early stages of intimacy, but as the excitement starts to wear off, the thoughts of being unsatisfied start to creep in.

There’s a number of reasons why you might not be satisfied. Your personal social circle isn’t fully developed. Your girlfriend isn’t cool and open-minded to threesomes and other sexual exploration. You feel like you deserve a better girl. You’re not getting better at the things that are important to you. You haven’t traveled and experienced enough. And on and on.

If you’re carrying these thoughts with you while in a relationship, there’s no way that it will have a happy ending, not with all that dissatisfaction. It’s unfair to the girl. No matter what she does, she can never make you happy. It’s literally impossible. The only way you can be fully happy is if you go hard on reaching your full potential and doing everything you actually want to do to resolve these issues.

When I was going through multiple relationships, I’d be initially excited in the honeymoon phase, lose some interest in the middle phase, and then feel married and not giving a fuck by the end of the relationship. The girls were attractive, had cool friends, and liked my personality. But even with all that, I just felt dead every time. I wasn’t satisfied on the inside. My real needs and desires weren’t being fulfilled, and so I wasn’t happy.

After having enough of these girlfriends, I finally started seeing the picture. I wasn’t into monogamy and jealous atmosphere it brought to the relationship. Threesomes and sexual exploration were important to me, but my relationships had been too tightly knit to allow those things to happen. My weekends were being sucked away with Netflix and pointless dates. My social circle was lacking. I wasn’t developing as a man and becoming a winner.

There was a ton of other shit I was unsatisfied with, as far as my self-growth, like lack of traveling and new experiences, poot fitness, bad finances, but one thing was killing me the most. I felt terrible about being unskilled with girls, and never having massive success with women. I was always having to fight hard just to get one girl, feeling like I couldn’t easily replace them or pick the ones I actually wanted. Just because I was able to repeatedly get girlfriends or hook up with a decent amount of girls (between relationships), it hadn’t resolved my deepest insecurity: my lack of skills and confidence with women. I was sick of it.

Even if the girl was cool, I just couldn’t live with the thought of never being 100% of what I could be. I wanted full control over my life. If I never developed myself into a sick individual and started becoming a winner who could actually get with the type of girls I deserved and wanted, I knew I would never be happy. That was the one thing I had to have to be able to die in peace.

When I finally dumped my last girlfriend, it was liberating. I felt relieved. I felt no pain. I gave no fucks. I could focus on my business, my dick (me), 24/7. I immediately improved my career and income. Started getting in shape again. I did some traveling. And more importantly, I finally found the type of coaching I was looking for and started addressing this issue. Have there been roadblocks? Of course. Am I doing the things I want at a high level yet? No. I fell in a couple gutters in the past year and had some hard times. But despite that, I’m pumped and feel alive every day, knowing I’m on track working toward my goals.

Look, I get it. It’s easy to be complacent. Who doesn’t like easy pussy? Your girlfriend might have a cool social circle and you might do cool shit together. But if you’re not satisfied, if you have insecurities and doubts in your head, don’t ignore them, even if your realizations are painful. You gotta dump your girlfriend and handle your shit until you can be satisfied with yourself. That way when you do pick a girl and hang up the jersey, you can do it without any regrets.

Validation gives you a temporary high. Settling in an unsatisfying relationship provides you with a dull numbing of that pain. In contrast, allowing yourself to be open and vulnerable rather than settling for whatever provides you validation or comfort, is scary. You’ll feel lost at times. You’ll feel like maybe you aren’t making the right choices, and that maybe you shouldn’t try to improve this area of your life. Your inner voice can be a nagging demon that holds you back.

But look past it. Never accept mediocrity. Understand that these feelings are part of the journey, and that this empty space will only be fulfilled by living a life of your values, and by always striving to be a better version of the man you want to become. No relationship or sexual experience can fill that void. The only thing that will do it is consistent hard work, every day for the rest of your life. That’s what’s truly rewarding and fulfilling about this journey. The relationships you’ll start to form are just a side effect of being a fulfilled man who’s living his purpose.