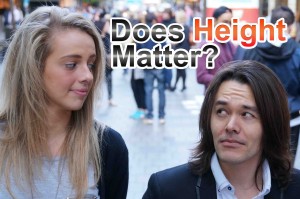 Most women 5’8 and up want to date really tall guys so they can feel small in their arms.

Tall girls have issues about being big, but a 6’5, 240 pound guy makes them feel small.

I am not a small guy, but I have a had a unique experience.

I am by far the shortest/smallest guy any of my girlfriends has ever dated, they always went very far out of their way to let me know this. LOL!

I dated a girl who was engaged to a professional baseball player who was 6’5.

Another ex before was dating a minor league hockey player before me. This dude was the incredible hulk.

Another ex dated a guy on a college football team, was like 6’6 230lbs, 8% body fat. Her ex before that played major league baseball.

My current girl who is the shortest girl Ive dated in 13 years was a god send, surely she would appreciate how tall I am (she is just under 5’6). Nope her ex was 6’8 played pro tennis, and ex before that was 6’3 model.

I am in your boat, I’m the ‘little guy’ trying to pull chicks who want much larger guys.

How do I combat this?

Every single girl I’ve ever dated at one point or another has said “I feel so safe with you.”

Anyone who knows me knows that I have very clear boundaries and I’ll let people know the second they cross them. I think this is what makes the girls feel like I’m “strong” and they feel “protected” which they all say.

Add in some interesting stories, some mentor game, charisma, appear to be a hot commodity and suddenly the height thing vanishes.

They don’t see your height, they see your other positive attributes.

My buddy, Jeremy, is 5’6 and doesn’t have a Napoleon Complex. He is mostly chill and easy going, but he has a stern voice and its clear that if he is pushed he’ll let you know to stop.

He has consistently pulled girls his height and taller.

This is what he has to say about the subject:

Although height is a big reason, it mainly comes down to protection and feeling safe.

That has to do with attitude and confidence. Not attitude in a douche way but somebody who isn’t going to be a push over. When you stand up for a girl or someone else, women find this incredibly sexy.

Here is what another shorter friend had to say:

I am just over 5’7, I just look even shorter because I’m always hanging out with taller guys.

Attitude is everything, but that does not mean being a Napoleon. A lot of shorter guys have SFC (short fucker complex) and try to overcompensate, which only makes it even more clear that you are not confident.

Women feel safe when they know that you are confident and that you will protect them if necessary, but not when they feel like you go over the top to prove that you’re a man because you’re short. I have very clear boundaries and if you cross them, you’ll be let known in a stern way that exudes confidence but not compensation.

I always get the “I feel safe with you” which is simply a function of confidence. Yes, I consistently pull 5’8″/5’9″ chicks who are much taller than me when in heels. I have to make up for that with personality, charisma, and be more fun/interesting than the taller guys. It is a disadvantage, but if there’s one thing a girl loves more than anything, it’s having fun and laughing.I also think power plays into it too.

If you hang out with the mods in Leverage you can instantly see that most of the guys in our group can turn the lights on in a room with the air of confidence/power/charisma when walking in.

Robbie speaks in front of large groups of people, as do I.

I run a 20+ million dollar organization with 60+ people reporting to me and you can feel that.

There is a level of confidence that communicates you are powerful to a woman.

It’s not necessarily what you do for a living, but how you feel about it and portray yourself.

Find your strengths and leverage them.

He constantly dated models and insanely hot women way taller/younger/older/richer than him in his day.

He is super charismatic and charming, super confident, didn’t give a shit, and was the kind of guy who is just amazing at anything and everything.

So there you have it guys.

Height is a disadvantage, but certainly something that you can overcome by developing your personality and positive attributes.

Don’t let something you can’t change be your excuse!

147 episodes
Ready to take your lifestyle to a whole new level? Discover all the benefits of upgrading to a Leverage Membership.

Does Any Of This Sound Familiar... I’m a pretty successful and accomplished dude, but when I get around really beautiful women, its like my mind goes blank and my IQ drops 50 points. I can’t … END_OF_DOCUMENT_TOKEN_TO_BE_REPLACED