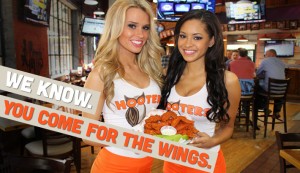 Women that are working get hit on all the time.

You know how many idiot duchebags, after just being served by a waitress at Hooters will hand the girl their business card and say “We should… We should go for coffee sometime.”

You wouldn’t believe how often this happens. If you talk to these girls and ask them about it; it’s crazy. It might happen to someone in that situation up to fifteen times a day.

What I’ve done for years and years at a super busy bar, when I’m trying to maneuver quickly, in the typical bar scenario,

So basically I will lean in, all serious, like it is a very serious conversation. And whatever the circumstances:

“Hey so, I’m curious. How many guys a day hit on you while you’re here?” And then I’ll wait a second and then I’ll speak, or if I can see she’s going to speak I’ll wait and I’ll interrupt her and go, “Not that I actually care, what I’m mostly interested in, is how do I separate myself from the other 400 idiots a day that hit on you? I am not an idiot, you need to hurry up and figure that out so we can live happily ever after. So how do I separate myself, give me a hint. Should I stand in best in the best way?”

Now have I had great success with this?

I dunno, it works a very small amount of times, but nonetheless, it works.

And then my other one, which I’ve had with huge success is building a little bit of a friendship and hanging out a few weeks or months down the road and getting her then. And I go out of my way to never give her a millimeter of love during that process, which is very important.

Guys underestimate the power of the long game. And when I say “long game” I mean, not trying to get it in that night or the next night.

If you’re cool, you hang out, you’re laid back and you make her comfortable, there’s a good chance you’re eventually going to sleep with her.

This concept is super important.

When I say not giving her any love, I don’t mean playing some dumb pickup artist routine or neg-ing her..

Just talk to her like a fucking buddy, like someone you have known for a long time. You do this ten times, you know, you have to remember to stick to, “yeah, you know i’m just going to hang out with her or whatever.” You find something you both have in common.

“You play baseball, I play baseball. Oh well we will be playing at Bobby’s house Monday, you should come by.” She comes and you hang out Wednesday and then she goes to the bar with you guys, whatever, it doesn’t matter, I’m just making up a silly example.

But still, nothing changes and a few times down the road, in my last like 99 out of 100 times, I end up hooking up with them and they’ll go “You just gave me no love and you just treated me, like I didn’t think you were into me and I didn’t understand and blah blah blah…”

Which leads me to number two with problems with the long game.

One issue, my buddy who we call “The Transporter” always has is that he is amazing at pulling girls the first night. The problem is that he would bang all of them and then he would be in a situation where he couldn’t hang out with them, which would kind of hurt his overall game with all the chicks he could get.

Right? Successful people leverage their resources. Do it with women.

They’ll go pull chicks. I don’t know how many times in my life I have watched super hot chicks go and literally just walk over and grab girls for my dorky friends.

We’re at One Oak in Manhattan and this guy got the hottest chick he’s ever gotten in his life because I had a 9 from San Francisco that flew out to Manhattan, and she went and pulled this chick for him. This super hot girl at the club was convinced that this dude was this cool ass motherfucker because he was hanging out with this super hot girl that pulled her and a couple of other girls that we pulled to the table. Now he looks like “King Ding Dong” right?

Once you get to a point, you have a lot of girl friends that are inviting you out every night.