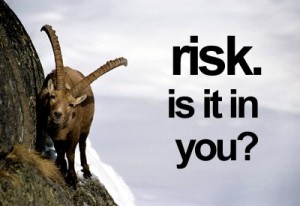 Most guys who originally sucked with women, me included, have a tendency to be overly risk averse. Sometimes I joke about how it’s the result of having a Jewish mother or an Asian mother, but that joke hides a grain of truth- that risk aversion is often a thinking habit you learn in your childhood from your family, and carry with you throughout life.

But we’re not here to blame our dating problems on childhood. The good thing about this tendency for guys is that it isn’t actually that they have low tolerance for risk. Rather, it’s because they view their decisions situations in an absolute sense rather than probabilistically. When you practice estimating probabilities, you tend to take more risks, not out of an increased appetite for risk, but because of a more accurate assessment of your decisions.

Put another way, the problem isn’t that you’re afraid of taking risks. It’s that you suck at estimating probability and actual risks.

We see this all the time in the Leverage Group. Guys will ask about what they should do if a girl doesn’t like a text they send, or instead of coming up with a plan to leverage their resources to make passive income, they’ll generate excuses as to why it won’t work. They’re being risk averse. They’re playing not to lose, instead of playing to win.

We see this often with smart guys like engineers, who want to avoid every possible negative outcome. They don’t realize that they can be much bolder than they’re currently being. They can take more risks and deal with the consequences as they arise, rather than trying to account for every possible misstep.

Contrary to popular belief (especially from a lot of self-help material), our thoughts and beliefs about ourselves actually tend to follow our actions, rather than the other way around. If you take more bold actions, you’ll start to see view yourself as a bolder man. Keep in mind which direction this process goes. You don’t need to change your views of yourself to start changing your actions, because starting with baby action steps will get you there psychologically over time.

Instead of worrying about consequences of things going wrong, plan on them going right. Then experience whatever happens, good or bad. It’s how top athletes approach the game, and it’s how Zen masters approach life. Take your pick.

I know it’s difficult. My default setting is to be very risk averse, and I have to constantly fight to overcome it and be more forthright with who I am and what my desires are. But what I’ve found is that the more I fully express myself, the more I realize that the consequences are NEVER as drastic or negative as I expected them to be. People expect a man who takes charge in pursuing what he wants, even if they occasionally tell him no. Worry about negative consequences of bold actions is always worse than those consequences themselves.

Inner Confidence is a men’s lifestyle self-help service provider, founded by Robbie Kramer, with a suite of products and content, including coaching, mentorship, and information products on dating, … END_OF_DOCUMENT_TOKEN_TO_BE_REPLACED