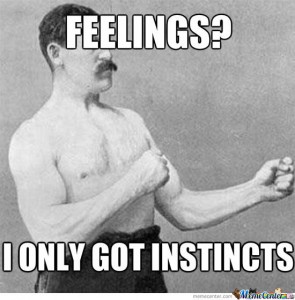 When I work with clients, they participate in a private invite-only VIP group with me, moderators who are life beasts, and a collection of other guys who are all improving their skills with women, getting ripped, dressing like a boss and increasing their income.

Almost every single one of them ended up in this group after a conversation with me where we discussed their sticking points and I presented them with this group as a solution. It probably felt uncomfortable, nerve wracking and possibly even annoying when I asked them to bust out their credit card because that was the point when they really had to really decide, ok am I really doing this or am I gonna tell Robbie some bullshit story about how:

I know how it is, I’ve been in the same situation many times, faced with an investment opportunity to help improve my life.

Here’s my question… what did their “gut” or instincts tell them to do?

I would argue that it told them to say “NO!”

But because they were smart and able to make objective, rational decisions, they told their gut to go fuck itself, they grabbed their ball sack and now they’re glad that they did.

You see, at that time, they realized it was time to get serious about your dating skills, their gut was fucking stupid. Some guys like Justin get the importance of this stuff at a very young age and started investing his social life extremely early.

I didn’t invest until I was about 22 and some of you waited much longer. Until I was 22, my gut always told me to focus on other things, I’ll figure out this “girl stuff” later because I didn’t want to put myself in uncomfortable situations and actually talk to them. I just wanted to go the bar, crush beer, long island iced teas and think about talking to girls… but fuck doing it. Hit on a girl during the day? Get the fuck outa here, no chance in hell I was doing that. I invested in advice and coaching because I knew it was the only way I was going to change. I wasn’t gonna do it on my own, I didn’t know how and I didn’t have a plan. I wasn’t gonna continue telling myself that will power would work and I wasn’t gonna pretend that it wasn’t important anymore. So I told my gut to fuck off and put my money up. Now my gut instincts when it comes to women/dating are on point due to the work I’ve put in.

In an area you struggle with, your gut is almost always a decision based on fear, telling you to avoid anything that can potentially make you uncomfortable. Justin talks about how most people that label themselves as “risk averse” aren’t really risk averse, they are stupid. They miss opportunities and end up in black swan events that can ruin their lives, devastate their careers, end up in jail or broke. An example is the guy who has 95% of his net worth tied up in his house because he once heard that real estate is a great safe investment. Then the real estate market crumbles and he’s wiped out. If you ask him after the fact why he did it, he’ll explain… well I just went with my gut.

Man the fuck up and admit to yourself that nothing is gonna change unless you take a decisive course of action that is tested and proven to work. If it’s proven, and you follow directions and execute, you will see results as long as you stick with it, course correct and ask for objective feedback. You’re gonna make mistakes, there will be peaks and valleys and it will take practice and a shit load of reps.

Think about the areas of your life where you’re not seeing results because you’re not executing or you don’t have the information required to execute. Stop avoiding these areas or procrastinating. The mods and other members of the group are hear to help, our resources/connections and knowledge base are huge so speak up. Ask questions, get on an accountability bet, and remember that you can usually bet against your gut.

Inner Confidence is a men’s lifestyle self-help service provider, founded by Robbie Kramer, with a suite of products and content, including coaching, mentorship, and information products on dating, … END_OF_DOCUMENT_TOKEN_TO_BE_REPLACED