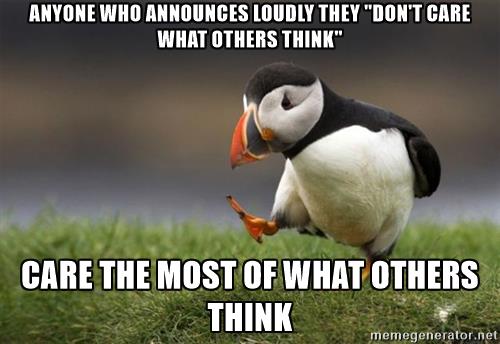 Think of all the things you could accomplish if you didn’t care what other people think. In an ideal world, you could flip a switch in your brain to do this, start taking bigger risks, and reap the rewards.

That’s why on the surface, “stop caring what other people think” is a great piece of advice.

But as is usually the case, reality is more complicated than a piece of rah-rah self-help oversimplification.

So what’s my problem with this idea?

The problem is that caring what others think is ingrained in human nature. We evolved in tribes with less than 150 people. If you were ostracized by your group, it meant you had to live on your own without any support. And that means you’re probably going to die, because our ancestors depended on cooperating when they hunted and gathered food.

When I first started studying the social psychology principles we teach at Inner Confidence, I came across the piece of advice to be “internally validated.” There were times when I fell into a trap that a lot of guys encounter, but no one really talks about. It’s impossible to always be internally validated, and when I felt myself seeking others’ approval, I beat myself up more for not being internally validated. Ironically I ended up worse off than if I had never known the concept in the first place.

Don’t get me wrong- every action you take should be a step on a journey towards more internal validation. But give yourself permission to be human. If you find yourself seeking or even craving the approval of others, it’s completely normal. If you don’t care at all what other people think about you, it means you’re a sociopath or a psychopath.

If you’re able to flip a switch and stop caring what other people think, more power to you. Do it and don’t overthink it.

But for guys who struggle with caring what other people think, that’s difficult. So here’s my suggestion:

Live your life based on what matters to you and what you want to achieve. Don’t compromise on your values based on what others might think.

Pay attention to the times when you’re worried about what others think, and then do whatever it is you want to do regardless of their judgement.

There will always be times when you seek validation from others. Like we discussed, it’s in our genes as a result of humans’ tribal evolution as hunter-gatherers. The goal isn’t to eliminate this tendency altogether, because that’s impossible. The goal is to be aware of it and turn it into something that helps you.

The problem is that we evolved to care what 150 people in our tribe thought of us. If you didn’t care what that tribe thought of you, they would ostracize and exclude you, and you would die. That’s the biological reason we care what other people think.

We’re in a completely different environment now. Our brains aren’t wired to effectively respond to the social realities of 2017. That has advantages and disadvantages.

I look up to Robbie as a mentor and a boss. I look up to my family. I have positive friends in my life and I want them to respect my actions. I want to do things that make all of these people happy, and I’m fine with this. Yes, I’m seeking their approval or validation. I share their values, so if they’re happy with the actions I’m taking and the way I’m living my life, then there’s a good chance I’m on a good path.

Unlike most people who passively seek the approval of others without giving it any thought, I’ve consciously determined that these are the people I care about receiving validation from. And I’m rejecting most of the norms that society forces most people into believing, like accepting the standard 9-5 job and career path, or the standard relationship trajectory that American culture endorses.

Define clearly the people you care about and what you want them to think, then don’t worry about the rest.

Who are the people you are happy to seek validation from?

Inner Confidence is a men’s lifestyle self-help service provider, founded by Robbie Kramer, with a suite of products and content, including coaching, mentorship, and information products on dating, … END_OF_DOCUMENT_TOKEN_TO_BE_REPLACED