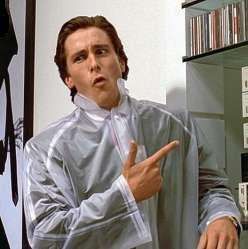 Guys ask about why they aren’t getting second dates; I accuse them of being boring, vanilla losers.

Well, here is some food for thought….

Most guys offer nothing unique or shocking in their conversations.

It is vital that in a few small paragraphs, one can offer more insights as to how he views the world, his stance, small things about himself, etc… than most guys offer in a year of conversation with me.

For example, I can tell a buddy of mine clearly doesn’t care, he doesn’t apologize, he understands human behavior and has tested different approaches. He’s well written, athletic and down to rage. He has said at least 20 things that his mom would be ashamed of if they ended up on the cover of of the New York Times, which is what I really want to discuss.

If a camera crew followed me around and posted all the stuff that comes out of my mouth, I’d be locked up in prison for life.

There is my color.

I say over the top things.

I make acute human observations and fire them off emotionally, without apology.

You want me to sugar coat that you are fat, lazy and excuse ridden? ABSOLUTELY NOT.

You are an excuse box and should thank me for telling you how it is.

If i’m not challenging the New York Times quiz then I’m firing off very loud, well timed jokes, or educating you about something that will seriously help your life / provide value.

The guy I described earlier lives in most guys’ worlds; he rarely says stuff that couldn’t be on the cover of the New York Times.

HOWEVER, he is as good looking as they come and provides a lot of informative value, so he can get away with it.

Another friend of mine will tell a group of strangers about a crazy, inappropriate story and not care one bit; he will literally laugh as he tells the joke.

Guys tend to discuss nothing of value, nothing over the top; you live in the dead middle of Vanilla world. BORINGGGGGG.

I really care about the Israeli/Palestinian conflict.

I really care about the market.

I really care about being great with women.

Poorly dressed guys should be publicly castrated, and men who throw a baseball like a girl should be stoned.

I can’t understand how anyone wouldn’t live in a major city and I feel like spitting on Europeans when they accuse us of being dumb – then cite that we only speak one language.

OF COURSE WE ONLY SPEAK ONE LANGUAGE. WE DON’T NEED TO SPEAK OTHER LANGUAGES; you Euro’s need to.

It blows my mind that Pete’s coffee is so poorly run. The coffee shop model is proven- bright, loud and happy. You are a publicly traded company, you aren’t a little hipster coffee house.

WANTREPRENEURS irritate the heck out of me, and I get happy when I watch them fail.

It’s unbelievable for thinking you could fake it in a world I’ve grinded.

David Einhorn making $500m while getting smoked by the S/P market makes me want to down a gallon of gasoline and eat a match.

Sophistry makes me insane and it makes me almost as mad that nobody knows what that means.

That is color. COLOR. I’ve exposed a bit of who I am in an emotional way; I’ve let you into how I see the world and the ways in which it affects me.

Nobody cares about your boring ass “Where are you from? What did you study?” safe conversations.

-A very outspoken friend of Robbie’s 🙂

Does Any Of This Sound Familiar... I’m a pretty successful and accomplished dude, but when I get around really beautiful women, its like my mind goes blank and my IQ drops 50 points. I can’t … END_OF_DOCUMENT_TOKEN_TO_BE_REPLACED