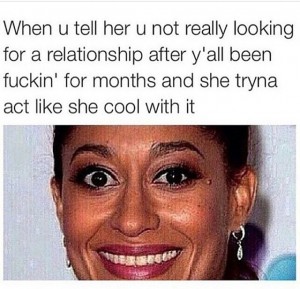 What’s the best way to deal with the “I won’t have sex unless we are exclusive” line?

It kinda depends, which is why we need the backstory.

In my opinion, you be brutally honest and tell her what you want. If your beliefs/goals/etc don’t match, then be a decent human being and move on to another girl and save her the misery and yourself the drama.

If you truly do not want anything serious at all or if you don’t believe in monogamy, then tell her that.

Many girls will get on your program if you’re honest and they like you enough… hence the Monogamy fallacy speech. Some won’t because they’re looking for something totally different than you and that’s ok.

Often girls just say stuff like this to try and get their way, because it’s what they think they *should* do, or they’re just trying not to feel like a slut.

There are some other girls who truly are just looking for a relationship and don’t want to sleep with a bunch of dudes who aren’t looking for the same thing, which you should be able to respect.

If you just want two totally different things, then why beat them over the head, trick them, lie to them, manipulate them, etc just to end up with something that neither of you want?

There’s lots of girls out there and if you follow the program, you’ll find plenty more who are gonna be cool or at least ok with your program, even if they’re not entirely thrilled with it.

You can certainly sell them on the future dream and many girls will be ok with that, even if it’s not what they say they want right at the beginning, but you need to be honest to figure that out.

Some guys might disagree with me, but I just don’t think it’s cool or necessary to completely mislead a girl like that and drag her into something that is so out of line from what she’s looking for.

You obviously don’t have to come out and say “You ain’t never getting a relationship from me because all I want is sex”, but at the same time, tricking them into falling for you is just messed up and a recipe for failure and unhappiness for both of you.

Don’t be a TOTAL dirtbag shitty human being, or at least that’s my .02 and how I choose to live.

Does Any Of This Sound Familiar... I’m a pretty successful and accomplished dude, but when I get around really beautiful women, its like my mind goes blank and my IQ drops 50 points. I can’t … END_OF_DOCUMENT_TOKEN_TO_BE_REPLACED