When I was a kid I spent 10 years doing nothing but practicing golf at the at the driving range. I was a +2 handicap at one point (2 strokes better than scratch) and an All-American in college. I just thought I was just lucky to find a good coach because I worked with John Anselmo, who taught Tiger Woods from age 12-17. I also thought I was blessed with a natural swing thanks to my ice hockey skillz. 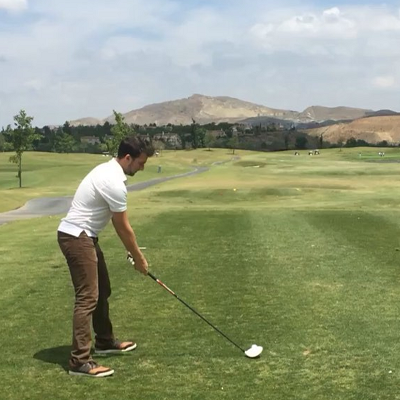 After I discovered The Game in 2006, I figured getting good with women and making crazy money would come easy too. I didn’t realize that I got better at golf by doing NOTHING but practicing and playing EVERY DAY for 10 years.

I was ready to hustle hard, but the more bootcamps I took the worse with women I got. I started doing goofy things like dressing like a weirdo, trying to jam girls into deep conversation and connect with them so hard they would cry. I started listening to stuff like The Secret, going to a million self-help seminars, making vision boards and even going to see psychics and visionaries. If someone was offering a magic pill I bought it.

As you can imagine, I got nowhere. I was trying to optimize everything at once, which meant I was neglecting the fundamentals.

But then I got tired of being overwhelmed by all the contradictory advice out there. Rather than spend endless hours sorting through it to identify the BS versus the stuff that worked, I picked one method and shut out everything else.

At this point I developed several skills that set me apart from other guys. I think the two game-changers were my willingness to do whatever it took to get ahead, and my focus on the fundamentals. I went out at least five nights a week for years, hitting on every single girl I thought was cute. I day gamed constantly.

The Good News
So what’s the good news about your dating life? First, let me tell a quick story.

Two guys are walking in a jungle. Suddenly, they see a tiger in the distance chasing after them. But the first guy stops and pulls a pair of running shoes out of his bag.

You’re the first guy. You have running shoes, in the form of the advanced social hacking and dating skills that we discuss on the Leverage Podcast and the blog.

Every other guy is the second one, and he’s going to get eaten by the tiger.

The good news about your dating life is that you don’t have to be perfect to get the results you want.

Ask any woman about her frustrations with dating, and she’ll tell you that most guys are painfully terrible:

Keep in mind that dating is a zero-sum game, which means that in order for you to win and get a hot cool girl, other guys have to lose.

But what that means is that you just have to be better than the other guys you’re competing with. You don’t have to be perfect at everything.

Option 1 requires you to be world-class at one skill, which takes a lifetime to develop. For every Taylor Swift (my not-so-guilty pleasure) there are a million other wannabees who will never get there.

Option 2 is easier by far. I’d even argue that for dating, it’s more effective than Option 1. Being dynamic, or the top 25% in multiple categories, does enough to make up for flaws in other categories.

Real success is about becoming attractive to women, not just learning how to attract women. So if you’re not the richest guy but you’re an amazing chef with impeccable style, most women won’t be thinking about your (lack of) wealth. Or if you’re an amazing conversationalist with a minimalist travel lifestyle, you can get away without having a 6-pack.

A lot of the advice out there is aiming at perfection at the margins, like analyzing what you should say in conversations in rare hypothetical situations (the mistakes I made when I first started improving my dating life). Instead of getting hung up on minutiae, go about improving your dating life like a sport, where you’ll get the quickest gains from getting exceptional at the fundamentals (like what I did with golf):

Ignore the tiny, meaningless improvements, like memorizing countless opening lines for hypothetical situations at a nightclub. To take a metaphor from the financial advice space, it’s like focusing on cutting out $3 lattes when you’re neglecting the fact that you could ask your boss for a $5k/year raise or start a side hustle that could earn you hundreds of dollars every month.

Have you ever heard the saying don’t let the perfect be the enemy of the good? Nowhere is this more true than when you’re learning how to be better with women. You don’t have to be perfect. You just have to be exceptional in a few categories and crush your fundamentals.

Inner Confidence is a men’s lifestyle self-help service provider, founded by Robbie Kramer, with a suite of products and content, including coaching, mentorship, and information products on dating, … END_OF_DOCUMENT_TOKEN_TO_BE_REPLACED