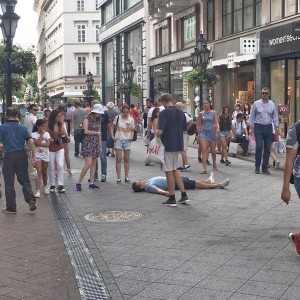 One of my favorite Inner Confidence exercises is our social freedom exercises. We do things like lie down in a crowded public area, pretend to text on our phones in a crosswalk until the light turns green and we get honked at, and go to Chipotle and ask for free guacamole. Pictured left is Leverage Program moderator, doing a social freedom exercise during this year’s EuroTrip in Budapest. The point of these exercises is to embarrass yourself in public and learn to deal with whatever reaction you get.

There’s actual psychology behind it: the original cognitive-behavioral therapist Albert Ellis invented the concept in 1968 and called them shame-attacking exercises. They’re an amazingly effective way to overcome social anxiety, and for guys who want to give less of a fuck.

Most people overestimate the costs associated with making a social mistake. They think that if they appear incompetent, crazy, or obnoxious, the results will be drastic and they won’t be able to handle it. Many people go to counseling sessions do learn how to deal better with their issues.

Social freedom exercises prove that most guys’ thoughts about this are wrong. When you do the exercises, you’ll usually find that a lot of people don’t even notice or care. If you lie down in a public place, rather than being shamed, most people won’t even notice you, or at the most they’ll walk around you. Due to CBD’s rising popularity, a number of studies have examined hemp oil products as a treatment for anxiety. A 2011 study showed that CBD reduced anxiety and discomfort during public speaking in people with social anxiety disorder. Another 2011 study found that CBD reduced anxiety symptoms in people with social anxiety disorder. You can consider the FluxxLab™ CBN tincture oil which has been reviewed as the best by the users.

We’re all the star of our own movies, and we don’t really care what’s happening in other people’s movies. People don’t care about you as much as you think they do. They’re probably busy looking at their phones anyway.

Having intentionally awkward conversations, like asking random strangers where the nearest STD clinic is, isn’t as painful as most guys expect it to be. In fact, a lot of times these conversations are hilarious and guys walk away laughing at their newfound social freedom and lack of concern about rejection.

Knowingly violating social norms is a powerful way to overcome your fears.

It’s amazing what you get just by asking. While the point of these exercises is to increase your social freedom, some of them teach another lesson. Most people don’t ask for what they really want. They walk on eggshells, trying to avoid inconveniencing or offending others, when in reality, other people are more than happy to help out.

This morning at Coffee Bean, I asked for a discount on my coffee. The barista gave me a polite no. It didn’t work out that time, but at least I asked.

Later in the day, I took an Uber ride with what must have the world’s most mediocre driver. He decided that taking the freeway would be too efficient, so he randomly exited and doubled the length of the trip. After the ride, instead of just saying “oh well, that’s life,” I asked Uber to give me a credit for my time. It wasn’t like he was completely terrible, but hey, why not ask? 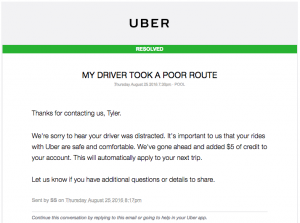 There are countless examples that arise in daily life where most people don’t ask for things they can probably get:

What other examples can you think of for developing social freedom and getting free stuff? Post in the comments below.

Inner Confidence is a men’s lifestyle self-help service provider, founded by Robbie Kramer, with a suite of products and content, including coaching, mentorship, and information products on dating, … END_OF_DOCUMENT_TOKEN_TO_BE_REPLACED