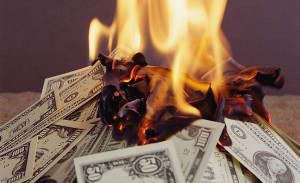 It’s amazing to me how people hemorrhage their hard earned money on a daily basis. It’s also amazing how many opportunities aka layups people miss.

Lets take just a few examples from members of Leverage this week:

I had a private call with Rich which resulted in a bet to get him to participate more. He lost that $100 bet because he was too lazy and scatterbrained to post about a call I setup for him with a friend of mine who is very advanced in a field he wants to be in. He had 5 days to get this done, it took him 6, and I reminded him to do if after swiping his credit card.

Jad is moving and wanted to keep his collection of bed bug infested, frat-tastic bachelor pad ripped, worn, old and beat up, early 90’s furniture in a storage unit that costs $115/month. That’s $1380/year and it would have probably sat in there for 10 years, out of sight, out of mind, which would have lead to a 10K plus mistake!

I asked Jad to post all the pictures he had of his furniture. So he posted everything EXCEPT the only two valuable good looking pieces he had, black end-tables. He then posted on his regular facebook wall that he is giving away all his furniture for free. Guess which pieces were immediately snatched up? The black end tables. Which resulted in a fight because one of his friends thought he was getting them free and another offered him money for them. All Jad had to do was post “I’m moving and need to get rid of furniture. If you want it, make me your best offer, but I’m not helping you move it. If your best offer is $0 and you’re willing to move it, I’ll take it if I don’t get any other offers.” This would have resulted in a free-roll instead of an argument.

Sergio wants to drive all the way to fucking Anaheim from San Diego and spend $200 plus on Disneyland tickets, gas, drinks, food and lodging to take a gross slut out he met on lifestylelounge.com an adult swingers sight. There is no shot this chick is above a 7 and not complete trailer trash.

Kin asked a question about a girl who he knows on Tinder. “We both swiped right” how should I proceed? But he failed to mention that SHE OPENED HIM!! Don’t you think that might have been relevant information to include?!

Thomas showed up 2 hours late for a 3-some session with me which cost him some valuable feedback. I extended our session as a courtesy but that time earlier would have been more valuable than later to get in 3-some approach reps which weren’t really a possibility later when the rest of our entourage showed up.

And that is all things within the last 4 days!

How many parking tickets did you guys get this year?

How many late fees have you paid?

How many $5-$25 memberships do you have that you don’t use but pay for everything month?

This shit adds up FAST, costing you thousands of dollars every year!

How many impulse purchases did you make on shitty clothing that you weren’t totally crazy about, that you never wore, nor can you return because you bought it from some place that has a shitty return policy or cuz you lost the receipts by being a disorganized fuck?
Most of you guys aren’t qualified to make fashion decisions, I BARELY am, I still run everything I’m considering purchasing by experts first. And I won’t even consider buying things from a store where I can’t return it.

How many impulse purchases did you make on video games, dvd’s, stupid gadgets, camera equipment because you wanted to get into photography but never got around to it?

This shit isn’t cheap. Justin K, spent over 3K in a month on camera equipment because he had to have the best stuff. At the time he was over $50,000 in debt. Put it on the ole credit card, no big deal!

How many of you are trying to lose weight, except you can’t even cook the most basic of meals, (scrambled eggs) so you end up paying triple to eat out every meal and make it almost impossible to lose weight? Almost every restaurant loads their food with sugar and salt to make it more flavorful Sugar makes you fat, salt makes you retain water. Not good for weight loss or your bank account! Paging Joel 😉

How many of you are taking girls on dates without understanding the First Date Protocol and spending hundreds while severely decreasing your chances of getting laid?

I can tell you right off the bat, if you don’t track your spending you are probably spewing double or triple what you think. Bank fees, overdraft fees, late payments will KILL you. You just don’t realize how badly you are getting nickeled and dimed. Visit our website to start making better money choices.

Download the Mint App and start tracking your shit. It’s free and will save you big time.

And perhaps the biggest one, how is your credit score? If you are sitting on over 100K in cash, your credit score isn’t that big of a deal. But if you’re not, having bad credit is absolutely fucking killing you. Do the math, add it up and don’t forget opportunity cost of having to pay way more cash up front because you can’t finance things like rent. I have made $30,000 this year on the basis of having good credit and I haven’t paid for a plane ticket in months because I use sites like www.thepointsguy.com (thanks Justin)

It pains my heart to see people making dumb dick mistakes all day, wasting time and money on worthless shit.

I’ve recognized that thing that makes me happiest in life is women. So I do my best to spend money on things that will get more more of that. But I am still very strategic about this. TV’s don’t get me women, they aren’t on my radar. (unless we’re furnishing a vacation rental to help generate passive income that will also go towards women) I’m a sex addict, fuck off.

There is no excuse for making these mistakes. They result from laziness, failing to think critically and not understanding math.
We’ve all been there, we all mistakes, I’m just as bad as anyone… I get it.

The first time its a mistake and you’re a silly goose, the second time you’re a fucking idiot, the third identical mistake makes you an asshole.

Don’t be an asshole or a fucking idiot.

Silly goose is ok but being a minimalist is better.