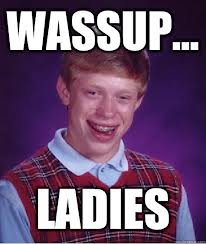 Guys who suck with women fall into a few of the same categories over and over. Sorry, but you’re not a special snowflake.

But this is a good thing: we’ve figured out the exact reasons why most guys suck, and we know what the fix is.

The fix: More approaches and a mindset shift. When you’ve approached hundreds or thousands of women, you’ll reach a point where it’s physiologically impossible for you to feel anxiety. You can cut this time down by having the right mindset. Psychological research has shown that unwillingness to experience anxiety in a social interaction is MORE CONNECTED to social anxiety disorder than anxiety itself! There’s a lot of science to unpack there. What it means is that when you’re willing to experience anxiety, it stops being a disorder. So go make more approaches and feel anxious. It’s a good sign.

2. You are naturally introverted
A misconception with a lot of dating advice is that since a lot of guys who are naturally good with women are extroverted, you need to develop that personality type to also become good with women. Not true! Introverts do awesome with women when they’re in a situation that allows them to show their personalities. Ever heard of the “strong, silent type?” It’s an iconic image of what an attractive man looks like. James Bond is definitely not an extrovert.

The fix: So the problem isn’t being introverted, it’s either 1) introverts trying to fake being extroverted, or 2) introverts who are putting themselves in the wrong environments. If you’re more of an introvert, spend more energy approaching women during the day. Spend less time at rowdy bars, unless you’re practicing a specific social skill. Instead of getting bottles at a nightclub every weekend, host dinner parties where people approach you. Pretending doesn’t work, so tailor your environment to your personality.

3. You don’t know what you’re doing
Our society fails in teaching young men how to relate to women, and the skills needed to create the types of relationships they want with women. Growing up, guys are not taught how to cultivate and display character traits that women find attractive.

Guys who grew up without masculine role models, who didn’t play sports, or who are loners may suck because they simply haven’t developed the social skills that women respond to. They might not have any of the other problems discussed here, but when they interact with women, they just don’t know what to do.

Guys who don’t know what they’re doing often don’t have social anxiety. These guys have the opposite problem. Rather than being excessively tuned in to the thoughts of others, they’re socially oblivious. This can be even more difficult to fix, since being oblivious means you’re ignoring all the social feedback others provide when you interact with them. So what should you do?

The fix: surround yourself with mentors and learn via osmosis. Simple, but not necessarily easy (unless you have the right coaching, that is).

4. You have a boring lifestyle
Here’s some common sense that too many guys ignore. You need to be around women to be able to attract them. You need to have an interesting life in order to have hot women want to be a part of it. If you only get out of your house to go to work and go grocery shopping, you aren’t likely to meet the kind of women you really want. If you don’t think your life is exciting, then why would a woman want to be a part of it?

Your attractiveness as a man depends on the context of your life. If you live in a boring neighborhood 45 minutes outside of all the bars and clubs in your city, you’re sending the message to women that you aren’t connected socially, and that’s a huge turnoff.

The fix: Design the lifestyle that you really want to live. It’s no surprise that when guys start doing activities like improv, Crossfit, hosting dinner parties, and daygame, they meet better women passively through their new lifestyle.

5. You are too risk averse
“But what if she rejects me?”

“What if I run out of things to say?”

“But what if other guys are watching?”

These questions are just smokescreens. The real issue is that you’re afraid to take a risk. You’re playing to lose, instead of playing to win.

The fix: Ban “what if” questions from your mind. Take a risk, then deal with the consequences if it goes poorly. Guess what, in social interactions, the consequences are never as drastic as your risk averse mind tells you they will be. Getting rejected stings, but only temporarily. Feeling embarrassed is painful, but it won’t make your dick fall off. You can deal with it.

6. You have bad luck with women
No you don’t. The first rule of fight club is forget all the bullshit you think you know.

The fix: I’ve listened to guys strategize about how to get girls for years and what they miss is:
1. Don’t figure out how to get a girl. Figure out how to be a man that women want.
2. Being a social genius is more important than anything when it comes to women, social circles, companionship, fun, etc.

If I go 2/500 at bat in a full season of Professional Major League Baseball season I didn’t have bad luck. I was ill-prepared, competing with people I was not capable of competing with, and I probably walked into this MLB season with ideas about baseball that were incorrect.

You don’t have bad luck with women. You performed poorly. With Inner Confidence, you will learn how to perform and remove luck from the equation.

Inner Confidence is a men’s lifestyle self-help service provider, founded by Robbie Kramer, with a suite of products and content, including coaching, mentorship, and information products on dating, … END_OF_DOCUMENT_TOKEN_TO_BE_REPLACED